Church of St. Mary the Virgin, in the Parish of Astley, Warwickshire 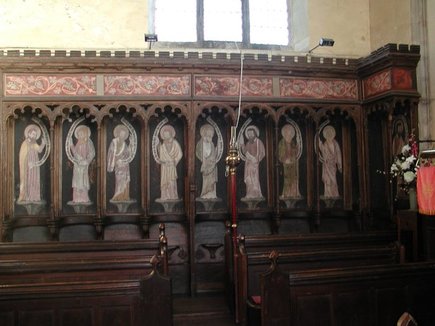 These stalls date from the 14th or 15th centuries during the time of the collegiate church and are believed to be unique. Originally there would have been a set of twelve on each side of the church. Remarkably two sets of nine have survived. Behind each stall is a painted panel, those on the north side depict apostles whilst on the south side prophets are shown. Each figure carries a scroll which would originally have contained a sentence from the creed, however these were overpainted in 1624 with sentences from the Psalms and Gospels.

​Each of the stalls is fronted with an arch supported by slender pillars which rest on the arms of the seat. The seats themselves each have a misericord which is carved with the figure of a wild boar, bird or other animal. Above the arches the cornice is painted with vine leaves and grapes. 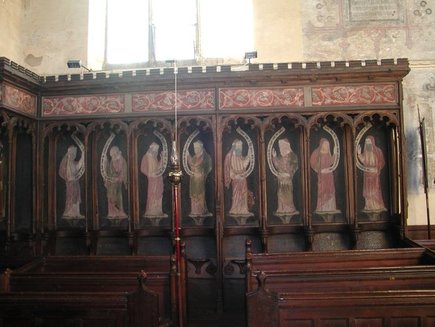 ​​The Apostles depicted are believed to be (from left to right in the picture above) Peter, John, Simon, Matthew, Matthias, Philip, James the Less, Thomas, and James the Greater. Not all of the prophets have been successfully identified, however in the above picture (from right to left), the first four are unknown then Oseas, Amos Joel, unknown, and Malachi (not visible above).